Screwdriver: Also known as "screwdriver" and "screwdriver", it is one of the most common household hand tools. Almost all furniture, electrical appliances, and electronic equipment are fastened by screws, and the screwdriver is the bridge for fastening. Screwdrivers are large or small, have a single word, and have a cross. They are inserted into the slots or recesses of the screw heads. Turning the screws can force furniture, electrical appliances, and electronic equipment in place.

Hammer: Hammer is also one of the common hand tools in the family. Sometimes things in the house are broken or when nails are to be nailed to the wall. Hammers come in various forms, the common form is a handle and top. One side of the top is flat for striking, and the other side is a hammer head. The shape of the hammer head can be like a horn or a wedge. The work of the wedge-shaped hammer is to pull out the nail, using the principle of leverage.

Test pencil: In the electrical work industry, we often see them tap the wire with something like a pen, like to measure something. After the measurement is completed, the electrician starts to operate. This pen is called the "electric pen" for short. It is an electrician's tool used to test whether there is electricity in the wire. There is a neon bulb in the pen body. If the neon bulb glows during the test, it indicates that the wire has electricity, or it is a live wire of the passage. The tip and tail of the test pencil are made of metal materials, and the barrel is made of insulating materials. When using the test pencil, be sure to touch the metal part of the end of the test pencil with your hand. Otherwise, because the charged body, the test pencil, the human body and the earth do not form a loop, the neon bulb in the test pencil will not emit light, causing a misjudgment. charged.

Utility knife: a knife with a sharp blade and several parallel scribes on the blade. Because it is often used to cut wallpapers and the like, it is also called a "wallpaper knife" and is often used in the decoration, decoration, and advertising plaque industries. The biggest feature of the utility knife is the use of easy-to-replace segmented blades. When using it, the unsharp section can be removed, and the sharpness can be maintained without sharpening the knife. 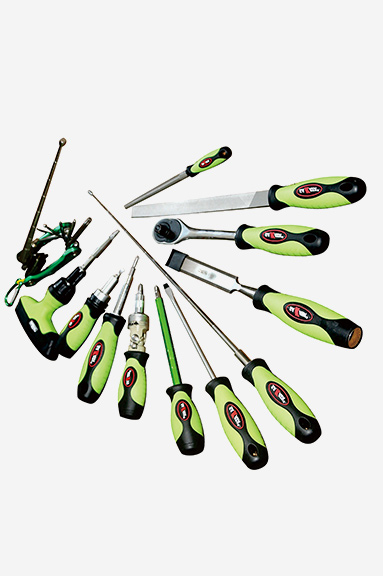 Hacksaw: I believe many people have seen woodworkers saw wood with a bow-shaped saw. This bow-shaped saw is a hacksaw. Hacksaws are not only used for woodworking, but they are also used in some households. For example, pruning the branches of the gardening trees at home, pruning the fruit trees, etc. Hacksaws include hand saws, cutting saws, folding saws, hand bow saws, edge saws, longitudinal saws, cross-cut saws, etc.

Level ruler: A level ruler is a ruler used to detect or measure horizontality and verticality. The spirit level has a horizontal bubble, which can be used to inspect, measure, and debug whether the equipment is installed horizontally. The straightness of the level material and the quality of the level bubble determine the accuracy and stability of the level.

File: A file is a hand tool used for frustrating and micro processing the surface of metal, wood, leather, etc. There are many fine strip-shaped teeth on the surface. In life, our most common file is the file on nail clippers. The file on the nail clippers is used to flatten and smooth the sharp corners of both sides of our nails after we finish cutting our nails.

Pliers: A hand tool used to clamp and fix processed workpieces or to twist, bend, or cut metal wires. The shape of the pliers is V-shaped and usually includes three parts: the handle, the jaw and the mouth of the pliers. There are many types of pliers, including wire cutters, needle-nose pliers, wire strippers, and pipe pliers.

Wire pliers: It is the "vise" that is familiar in our lives. It is a kind of clamp and cutting tool. The jaws have blades, which are mostly used to pick up nails or pinch off nails and iron wires. Wire cutters are divided into toothed and toothless ones. The toothed ones can increase friction and clamp things more firmly, but they may cause damage when clamping soft objects.

Needle-nosed pliers: also called trimmers, pointed-nose pliers, and flat-nosed pliers. They are mainly used to cut single and multi-strand wires with smaller diameters, as well as to bend single-strand needle-nose pliers wire connectors and strip plastic insulation Layers and so on. It can be operated in a relatively small working space. Those without a blade can only pinch and work, and those with a blade can cut small parts. It is commonly used in assembly and repair work such as electricians (especially internal electricians), meters and telecommunication equipment One of the commonly used tools.

Wire stripping pliers: Wire stripping pliers are one of the tools commonly used by inside electricians, motor repairs, and instrumentation electricians. They are used by power supply workers to strip the surface insulation layer of the wire head. Using the principle of leverage, when stripping the wire, first grip the clamp handle so that one side of the clamp head clamps the other side of the wire, and the insulation layer of different wires can be stripped through the different blade holes of the blade.

Pipe wrench: Also called pipe wrench, it is not common in daily life. It is used to fasten or disassemble various pipes, pipeline accessories or round parts. It is a common tool for pipeline installation and repair. Generally used to clamp and rotate steel pipe workpieces. It is widely used in the installation of petroleum pipelines and civil pipelines.

Multimeter: also known as multiplexer or multimeter. It is a magnetoelectric meter with a rectifier that can measure various electrical parameters such as AC and DC current, voltage and resistance. The display mode is divided into pointer and digital. This type is an indispensable measuring instrument in power electronics and other sectors.