How much do you know about pliers？

Introduction to Pliers
Pliers are hand tools used to clamp and fix processed workpieces or twist, bend, or cut metal wires. The shape of the pliers is V-shaped and usually includes three parts: the handle, the jaw and the mouth of the pliers. 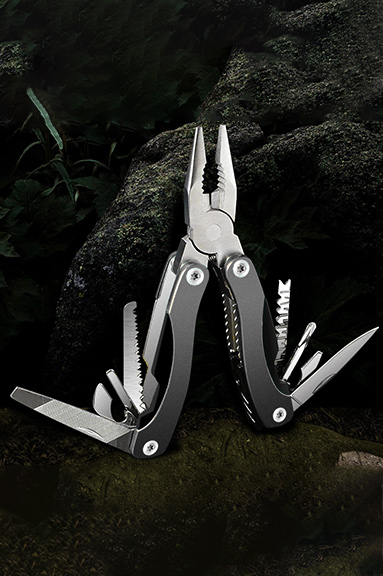 The role of pliers
1. Wire cutter: It is a kind of clamp and cutting tool. The wire cutter consists of a clamp head and a clamp handle. The clamp head includes a jaw, a tooth, a knife, and a guillotine. The role of each part of the pliers is:
① The tooth opening can be used to tighten or loosen the nut. ② The knife edge can be used to cut the rubber or plastic insulation layer of flexible wires, and can also be used to cut wires and iron wire pliers. ③ The guillotine can be used to cut hard metal wires such as electric wires and steel wires. ④. The insulated plastic tube of the pliers has a withstand voltage of more than 500V. With it, it can cut wires with electricity. During use, avoid littering.
2. Needle-nosed pliers: also called trimming pliers. They are mainly used to cut single-strand and multi-strand wires with smaller diameters, as well as to bend single-strand conductors and strip plastic insulation, etc. It is also an electrician (especially Inside electrician) one of the commonly used tools, it is composed of a pointed tip, a knife edge and a pliers handle. Electrician's needle-nose pliers are covered with insulating sleeves with a rated voltage of 500V. Needle-nose pliers have sharp heads and are used in tight spaces. The operation method of using needle-nose pliers to bend the wire connector is: first fold the thread to the left, and then bend the screw to the right in a clockwise direction.
3. Wire stripper: one of the tools commonly used by inside electricians, motor repairs, and instrument electricians. It consists of a knife edge, a crimping port and a clamp handle. The clamp handle of the wire stripper is covered with an insulating sleeve with a rated working voltage of 500V. Tubes and wire strippers are suitable for stripping plastic and rubber insulated wires and cable core wires.
4. Pipe pliers: used to tighten or loosen the knots or pipe nuts on the wire and tube, using the same method as the adjustable wrench.

How to use pliers
1. Under normal circumstances, the strength of the pliers is limited, so it is not possible to use it to operate the work that can not be achieved by ordinary hand strength, especially the smaller model or ordinary needle-nose pliers, use it to bend strong bar materials. It may damage the jaws.
2. The general pliers have three cutting edges, which can only be used to cut iron wires but not steel wires.
3. The handle of the pliers can only be held by hand, and cannot be applied by other methods (such as hitting with a hammer, clamping with a bench vise, etc.).