What are the common hardware tools in the family?

1. Wrench is a commonly used installation and disassembly tool. It is a hand tool that uses the principle of leverage to turn bolts, screws, nuts and other threads to hold the openings or sleeves of bolts or nuts. Wrenches are usually made of structural steel made of carbon or alloy materials. Wrenches are usually made with openings or sleeve holes for holding bolts or nuts at one or both ends of the handle. When in use, an external force is applied to the handle along the thread rotation direction to turn the bolts or nuts.

2. A screwdriver is a tool used to turn a screw into place. It usually has a thin wedge-shaped head that can be inserted into the slot or notch of the screw head. There are mainly two types: one word (negative sign) and cross (positive sign). Hexagonal screwdrivers are also common, including inner and outer hexagons. 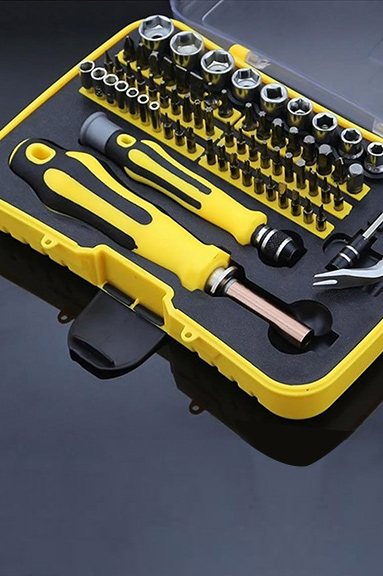 3. The vise is a kind of clamp and cutting tool, which is a labor-saving lever. There are German and American styles. German style is also called European style. It has a smooth appearance and a good sense of squareness. It pays attention to the function of clamping; the American style mainly focuses on the function of cutting. The vise is divided into teeth and toothless. The teeth can increase friction and clamp things more firmly, but it may cause damage when clamping soft objects. Generally use toothless ones, but less toothless ones.

4. Claw hammer is a kind of hammer. Generally, one end of the claw hammer is round, and the other end is flat and bent down and has a V opening. The purpose is to lift a nail. Claw hammers existed in ancient Rome, but the style of modern claw hammers was designed by Americans.

5. Utility knife, used for cutting. Also commonly known as a carving knife or wallpaper knife. When the utility knife is in normal use, only the tip part is usually used. Cutting, carving, and dotting are the main functions. However, the blade of this kind of knife is very fragile, and the blade cannot be extended too long when used. In addition, the hardness and durability of the blade (these are two concepts in the utility knife) are also different due to the different texture of the blade.